Displaying considerable growth as a pass rusher, Dexter Lawrence has put together his best season. The only piece of the Odell Beckham Jr. trade left on either team has offered a breakout year and is on track for what should be a monster payday.

Lawrence would prefer that contract come from the Giants. While he did not follow Kadarius Toney‘s lead by having a detailed layout of the New York skyline tattooed on his back, a Giants tattoo adorns Lawrence’s arm. Unlike Toney, it seems improbable Lawrence will need to consider any potential alterations anytime soon. 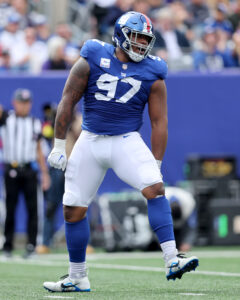 “I do want to be a Giant forever. I got it tatted on me,” Lawrence said, via the New York Post’s Ryan Dunleavy. “I love this organization, the people in it and what it means. I grew up a Giants fan. If it is meant to be, it will be.”

The Giants drafted Lawrence with the first-round pick obtained from the Browns in the Beckham deal in 2019. With Beckham, Olivier Vernon, Kevin Zeitler and Jabrill Peppers no longer with the Browns or Giants, Lawrence is the only part of that trade still in place. He has joined other Dave Gettleman-era investments — like Saquon Barkley, Daniel Jones, Andrew Thomas and Leonard Williams — in driving the would-be rebuilding team to a playoff berth in the Brian Daboll–Joe Schoen regime’s first season.

Lawrence, 25, graded as Pro Football Focus’ No. 1 interior defensive lineman this season. The Clemson product totaled 7.5 sacks and 28 quarterback hits, smashing career-high numbers, in his first season under DC Don Martindale. The 342-pound defender also forced two fumbles and batted down three passes this season, a campaign that will put him in position to be one of the players set to bridge the gap between Aaron Donald and the field at D-tackle.

Lawrence, Jeffery Simmons, Quinnen Williams and Daron Payne are candidates to bridge what is now a staggering gap between Donald ($31.7MM per year) and the field ($21MM AAV). Leonard Williams is one of the two players on a $21MM-per-year deal, complicating Big Blue’s path a bit. Williams’ contract expires after the 2023 season, and the Giants would have the franchise tag as a Lawrence last resort come 2024. The Giants are projected to hold nearly $60MM in cap space next year, good enough for third-most — as of mid-January — in the league. CBS Sports’ Joel Corry said (via Dunleavy) Lawrence waiting until after Simmons and Quinnen Williams sign would be a better option for his extension value, but this season has undoubtedly driven his stock skyward.

The 2023 offseason will be a busy one for the Giants, who have Barkley and Jones looming as free agents-to-be. Once those dominoes fall, however, Lawrence figures to move to center stage for Schoen. The rookie GM has some interesting decisions to make thanks to a host of the previous regime’s first-rounders either resurfacing as impact players (Barkley) or taking leaps (Lawrence, Jones) this season.