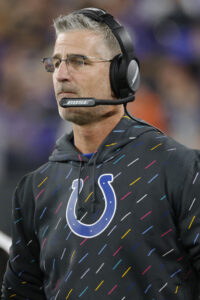 The Carolina interim HC and the former Colts HC are the first known finalists for the full-time gig and will each go through second interviews Wednesday, Ian Rapoport and Tom Pelissero of NFL.com note (Twitter links). Wilks gained steam throughout his interim run, while Reich has interviewed with both the Panthers and Cardinals.

Carolina is believed to be targeting experience with this year’s hire, which certainly makes sense after its Matt Rhule whiff, but Rapoport adds (via Twitter) Cowboys OC Kellen Moore impressed Panthers brass during his first interview. It would not surprise to see Moore, then, book a second interview. But he does not bring the experience Reich and Wilks do.

Although Wilks generated extensive support to keep the gig, the Panthers have already begun interviewing defensive coordinator candidates. They have spoken with Vic Fangio and requested interviews with Kris Richard and Marquand Manuel. Wilks’ background is on the defensive side, and Al Holcomb served as Carolina’s interim DC in the wake of the Phil Snow firing. The Panthers already taking steps to interview defensive bosses — and not move toward addressing its OC — points to the team making post-Wilks plans. Carolina has long been connected to an offense-oriented hire, but Wilks going 6-6 in his interim chance and not receiving strong consideration would likely have gone over poorly among Panthers players.

Reich stands to have options — either as a head coach or coordinator — in the coming days and weeks. Should he strike out on securing a second head coaching opportunity this year, teams have been connected to the five-year Colts coach for OC openings. The Chargers, Jets and Rams have been connected to Reich in some capacity. Both the Bolts and Jets gigs come with play-calling responsibilities, but Reich said soon after his Colts dismissal he wanted to stay on the HC level. The Panthers have already discussed staff options with Reich, per CBS Sports’ Josina Anderson, and SI.com’s Albert Breer notes the veteran play-caller has gained steam throughout this process (Twitter links).

This component may not matter too much as the team looks to regain its footing after the seven-year Rhule deal backfired, but both Wilks and Reich have ties to the Charlotte area. Wilks grew up in the city, while Reich spent the 1995 season with the Panthers’ inaugural edition. Reich’s brother also is the head coach at Wingate, a college in the area.