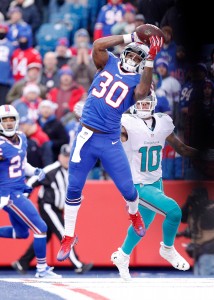 The Jets have signed eight undrafted free agents, according to a team announcement:

Marks left Washington State as the Pac-12’s record holder for career receptions, but still didn’t hear his name called after 250+ selections on draft weekend. Some believe that Marks went undrafted because of the perception that his stats were inflated by the Cougars’ pass-heavy offense. For his part, Marks rejects that notion.

“Guys are trying to call us ‘system receivers’ like that’s a thing,’’ Marks told the Seattle Times in February. “It’s not a thing. You’ve still got to do it. It doesn’t matter the system that you are in. You’ve still got to catch the ball. Somebody has to catch the ball and score the touchdowns. If you just put some guy out there that couldn’t play, it wouldn’t work. I just get an opportunity to catch more passes — I can understand that. But I’m still getting open. So the whole ‘system receiver’ thing kind of bothers me a little bit.”

Estime probably had interest from at least one other team since he received an above-average $15K package ($5K bonus, $10K base) to sign with the Jets (Twitter link via Tom Pelissero of USA Today).