Ravens tight end Darren Waller has been reinstated after serving a yearlong suspension for violating the league’s substance abuse policy. In order to bring him back on the roster, the Ravens have waived/injured wide receiver Jaelon Acklin. 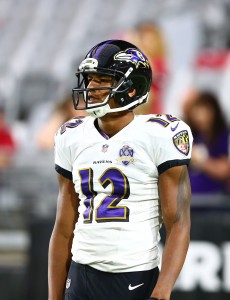 Waller, 26 in September, served a four-game substance abuse ban in 2016, so his second violation of the substance abuse policy last year resulted in a one year suspension. The tight end was forced to sit out the entire year and lost out on $615K in salary.

In 2016, Waller had ten catches for 85 yards and two touchdowns. His offensive output was minimal, but he appeared on nearly half of Baltimore’s special teams snaps.

This year, he faced an uphill battle to make the roster. The Ravens drafted two tight ends in Hayden Hurst and Mark Andrews, meaning that Nick Boyle, Maxx Williams, and Vince Mayle are competing for one or maybe two spots. For what it’s worth, it appears that the Ravens will at least give Waller an opportunity to play catchup and make the final cut.