WEDNESDAY, 5:59pm: It appears that Worthy has passed his physical since the trade is now on the NFL transactions wire, according to Tom Silverstein of the Journal Sentinel (on Twitter).

8:18pm: Tyler Dunne of the Journal Sentinel (on Twitter) hears that the Packers are getting a conditional future draft pick for Worthy.

6:38pm: The Patriots have added two defensive linemen via trade in one evening. Shortly after acquiring defensive lineman Ben Bass from the Cowboys in exchange for cornerback Justin Green, the Pats have landed defensive tackle Jerel Worthy from the Packers, according to agent Chafie Fields (on Twitter). 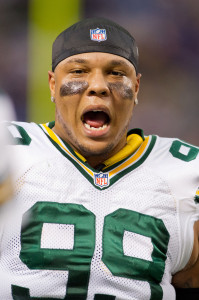 The deal, however, is pending a physical, and that’s more than just a mere formality. Worthy, a 2012 second-round pick out of Michigan State, tore his ACL in the final game of the 2012 season and played only 12 snaps last season. Meanwhile, he has yet to practice this offseason thanks to a back injury. Worthy saw time in 14 games for Green Bay in 2012 and made four starts, notching 2.5 sacks and 11 tackles in total.

If he’s healthy, the Patriots are adding a tremendously strong defensive tackle/end who has a proven track record of getting to the quarterback from his time with the Spartans. Worthy would also help to supplement New England’s depth on the defensive line along with Bass, who has also been hampered by health issues this offseason.

The Patriots are hoping that Dominique Easley will also be a key contributor on the d-line this season but tonight’s trades could signal that they are concerned about his health. The former University of Florida standout and No. 29 pick in this year’s draft tore his ACL last season and only began practicing this week. Easley did some individual drills and then worked on a tackling dummy, according to Adam Kurkjian of the Boston Herald, but wasn’t going full speed.