6:40pm: The Broncos’ decision to stick with McManus over Prater has to do with the NFL’s early termination rules, writes Mike Klis of the Denver Post. According to Klis, waiting until after the game Sunday could have subjected the team to paying the rest of Prater’s $2.117 million salary.

The team was also worried about Prater’s status going forward, knowing that after serving a four-game suspension, the next transgression would result in a year-long ban from the NFL.

1:24pm: The Broncos confirmed the move in a press release.

“Parting ways with Matt Prater—the longest-tenured player on our roster—was a very difficult football decision,” Executive Vice President of Football Operations and General Manager John Elway said. “On behalf of our entire organization, I want to thank Matt for his seven seasons with the Broncos and wish him well going forward.”

12:47pm: The Broncos are releasing kicker Matt Prater, a source tells Adam Schefter of ESPN.com (on Twitter). Prater, who has been one of the NFL’s most successful kickers in recent years, is coming off of a four-game suspension. 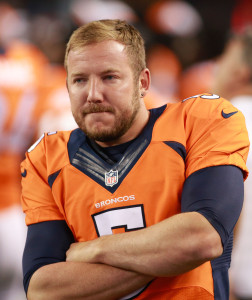 Last season Prater was solid for the Broncos and fantasy owners alike, nailing 25 of his 26 field goal tries, including a record 64 yard three-pointer against the Titans in December. Considering his resume, it’s hard to see Prater being out of work for long and he’s certain to have tryouts in the next few weeks for teams that have unstable kicker situations. As cap guru Brian McIntyre (via Twitter) notes, the move saves the Broncos $2.294MM in cash/cap space in 2014. Prater will count about $812K against the team’s 2015 cap.

With Prater gone, understudy Brandon McManus will take over in Denver. Through three games this season, the Temple product has nailed all three of his field goal attempts and all eight of his extra point tries. McManus’ field goals weren’t exactly difficult ones – he connected from 24 yards or less on each one – but he boasts a strong leg and is capable of hitting from deep.

Today’s news is cause for celebration in the McManus household and at Giants headquarters. The McManus deal called for Big Blue to receive a conditional seventh round pick that would only be conveyed if he stayed on as Denver’s kicker after Prater’s suspension was through. That seemed unlikely at the start of the season, but it’s now the reality and the Giants have now tacked on an extra draft pick, albeit a very late one.