THURSDAY, 11:37am: The Jaguars have officially signed Jackson, John Oehser of Jaguars.com tweets.

TUESDAY, 1:35pm: Jackson and the Jaguars agreed to a six-year deal worth up to $90MM, with $42MM in fully guaranteed money, reports Mike Klis of 9NEWS. According to Klis, the deal is worth $85.5MM, with another $4.5MM in playing-time incentives for the final three seasons.

Jackson’s $42MM guarantee puts him right in the ballpark of Marcell Dareus ($42.9MM), exceeding every other defensive lineman’s guarantee except for Ndamukong Suh‘s (nearly $60MM).

12:20pm: If the deal is finalized between the Jags and Jackson, the defensive lineman will earn roughly $15MM per year, a source tells ESPN.com’s Adam Schefter (on Twitter).

12:10pm: Malik Jackson has agreed to join the Jaguars. The former Broncos defensive lineman confirmed to Josina Anderson of ESPN.com (on Twitter) that he is Jacksonville-bound. Negotiations are still ongoing, per Ian Rapoport of NFL.com (on Twitter), but it will be a six-year deal once it’s all done (link). Of course, no deal can be official until Wednesday at 4 ET/3 CT. Exact terms of the contract are not yet known. 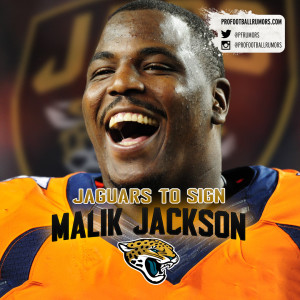 Jackson recorded a personal-best 45 tackles and five sacks during his third straight 16-game regular season in 2015-16, finishing 16th out of Pro Football Focus’ 123 qualifying interior defenders in overall performance (subscription required). PFR’s Luke Adams ranks Jackson the second-best free agent in this year’s class. As of this writing, the Jaguars have roughly $82MM in cap space, per Over The Cap. The Jackson deal will obviously put a significant dent in that number.

The Jaguars are clearly high on Broncos players as they have signed Denver free agents to big deals in each of last three years. In 2014, they inked offensive lineman Zane Beadles. In 2015, the Jaguars added tight end Julius Thomas on a five-year deal with a base value of $45MM. So far, this pro-Broncos strategy has been something of a mixed bag for Denver. Thomas caught 46 passes for 455 yards and five touchdowns in an injury shortened season. Beadles, meanwhile, was released just days ago. In 2015, Pro Football Focus ranked the guard 64th out of 81 qualified guards.

In Jacksonville, Jackson might play a role similar to Michael Bennett where he is on the outside on early downs and inside on passing downs. The Jaguars are also expecting to have a healthy Dante Fowler in 2016, so the Jags’ pass rush is shaping up to be rather strong.

Before agreeing to sign with the Jags, Jackson was also being chased by a group of teams including the Raiders, Bears, and the incumbent Broncos.