The Bengals have created a little cap room and helped to clear a linebacker logjam by releasing veteran defender A.J. Hawk, the team announced today (via Twitter). Alex Marvez of FOX Sports first reported (via Twitter) that Hawk would be cut by Cincinnati. 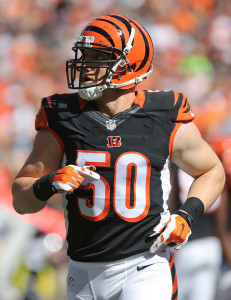 Hawk, who spent the first nine years of his NFL career in Green Bay, signed a two-year deal with the Bengals in 2015, but ultimately only played out half of that contract before being given his release. In his lose season in Cincinnati, Hawk was a part-time contributor at linebacker, picking up 24 tackles and a sack.

Hawk’s contract called for a $1.1MM base salary, $200K in per-game roster bonuses, and a $100K workout bonus for 2016. Because none of that money has been paid yet, and the contract didn’t feature a signing bonus, the Bengals will clear Hawk’s entire $1.4MM cap hit from their books by releasing him. The former fifth overall pick won’t have to clear waivers, so he’ll be immediately eligible to sign with a new team.

Even without Hawk in the mix, the Bengals have several options for their three starting linebacker spots. The club added Karlos Dansby in free agency, and also have Rey Maualuga, Vontaze Burfict, and Vincent Rey on the roster, though Burfict will serve a three-game suspension to open the regular season.