The old adage that defense wins championships may or may not be true, but you’ll be hard-pressed to find a title-winning team that didn’t build heavily through the draft. Rookie classes, naturally, are evaluated on the perceived upside of the NFL newcomers, but which rookies are ready to contribute right out of the gate? Furthermore, how do they fit in with their new team schematically?

To help us forecast the immediate future of these youngsters, we enlisted the help of NFL Draft guru Dave-Te Thomas who has served as a scouting personnel consultant to NFL teams for multiple decades. 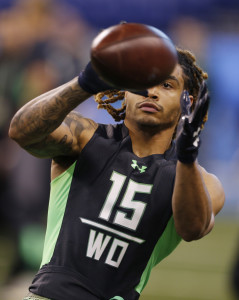 Losing an aging Andre Johnson before the 2015 season put a lot of pressure on DeAndre Hopkins, as he was constantly being double teamed. Still, without the benefit of a quality “wing man” on the other side and even more problems at quarterback, Hopkins saw 31% of the team’s passes targeted to him, making 111 grabs that included 11 touchdowns. Johnson’s replacements were found wanting, as Nate Washington took in just 47-of- 95 targeted passes. Cecil Shorts, who recently agreed to a drastically reduced contract, caught just five balls for at least 20 yards among his 42 grabs. The addition of Fuller made Washington a roster casualty and forced Shorts to “shorten” his money to return in 2016. Fuller will not dazzle you with his slight frame, but he definitely disproved scouts who felt he was not fast with a blazing 4.32-second clocking in the 40-yard dash at the 2016 NFL Scouting Combine. He builds acceleration nicely and displays excellent balance and change of direction agility. The thing you see on film is that he has very good success on jump-ball battles (won 12-of- 14 last year), as he does a very nice job of adjusting under the ball and timing his leaps. Along with his body control, he has some of the best stop-and-start skills in this draft class.

With Chad Slade and Oday Oboushi the only bodies on the roster behind starting guards Jeff Allen and Xavier Su’a-Filo, Martin could also serve as a valuable sixth man on the O-Line, if Mancz or Bergstrom somehow manage to win the center job. Both of those veterans also have experience playing guard and when you couple that with Martin’s arrival, it seems like Slade and Oboushi may not survive training camp, especially if the team opts to keep just ten offensive linemen.

Shorts, Keith Mumphery, and Jalen Strong will not only have to deal with the arrival of Fuller, one or more players from that trio could be playing elsewhere next season, thanks to third round pick Braxton Miller. The former Ohio State quarterback should take over slot receiver/H-Back duties and adds another element to the offensive game plan with his throwing arm and running ability to perform in the wildcat package. 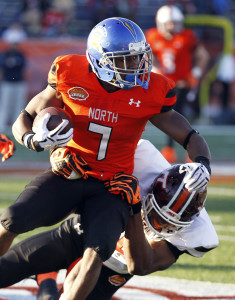 The Texans did not draft Ervin to be their featured back as he obviously lacks the size to carry the ball 25-30 times per game. However, the speedy ball carrier did run for 1,601 yards while displaying his 4.42 speed in 2015. He should be the ideal third-down back, as he also caught 45 balls last season. Look for the San Jose State product to spell Lamar Miller during passing situations and he could replace the duo of Shorts and Mumphery as the team’s new punt returner, as those two combined for just 7.3-yards per return.

If the team opts to keep five running backs, Miller and Ervin will nail down two spots. Fullback Jay Prosch will be challenged by Soma Vainuku, while Kenny Hilliard’s ability to play both spots could give him an advantage over Alfred Blue and Jonathan Grimes for the final spot in the backfield.

One man’s misfortune (Karl Joseph’s injury) was another’s fortune in 2015, as Dillon took on a bigger role once his All-American teammate was lost for the 2015 season. Dillon’s ability to play both safety spots, along with starting experience as a weakside linebacker makes him the secondary’s wild card entering camp. Dillon’s physical hitting style will be a better fit at strong safety, where 2013 second rounder D.J. Swearinger never panned out.

Currently, ahead of Dillon on the depth chart are Eddie Pleasant and Kurtis Drummond, but both were castoffs signed as free agents by the Texans.  If Drummond manages to emerge as the strong safety, Dillon can mount a challenge for the free safety position that is occupied by Andre Hal, a 2014 seventh-round pick. Hal led the team with four interceptions and 14 pass break-ups last year, but lacks the coverage speed to handle deep routes. Dillon could displace Hal, who would then slide into a more comfortable role in the sub packages.

If the team keeps five safeties, Dillon, Drummond and Hal should fill three spots, with Pleasant, Demps, Jets castoff Antonio Allen and 2014 seventh-rounder Lonnie Ballentine battling it out for the final two places. If Allen proves he’s recovered from a torn Achilles tendon that forced him to miss the 2015 campaign, a stating tandem of Dillon and Allen at the could be in the team’s future.

Dave-Te Thomas owns and operates The NFL Draft Report, a service which has provided insight to league scouting departments for over 40 years. All year round, can read Thomas’ in-depth reviews of both blue chip prospects and diamonds in the rough by visiting the NFL Draft Report blog.