4:28pm: The Jaguars and wide receiver Allen Hurns have agreed to a contract extension that will average more than $10MM per season, according to Pro Football Talk (on Twitter). With escalators, Hurns can earn as much as $11MM per year, Mike Florio of PFT reports.

Ian Rapoport of NFL.com confirms the $40MM+ pact for Hurns, tweeting that it is a four-year deal for the Jags’ No. 2 wideout that contains four new years an $20MM in guarantees. Although he came into the league with the same draft class as receivers who aren’t yet allowe 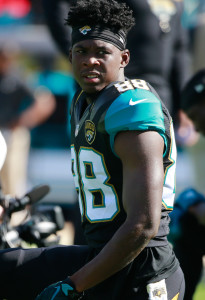 d to sign long-term extensions, Hurns can because those rules do not apply to undrafted players. So, this loophole will oddly give the UDFA gem financial security before the rest of the star-studded 2014 receiver class, which included Odell Beckham, Jarvis Landry, Sammy Watkins and Jacksonville’s No. 1 receiver, Allen Robinson.

The 24-year-old wideout wasn’t set to become an RFA until March of 2017 and, under the terms of his previous agreement with the north-Florida franchise, would not have been a UFA until the following spring.

So, it’s an early payday for Hurns after he enjoyed a breakout season in 2015 in joining Robinson in compiling 1,000-yard slates. After quickly establishing himself as a key performer in a rebuilding Jags offense in ’14 with 677 yards, Hurns exploded for 1,031 and 10 touchdown receptions in 2015.

Jacksonville came into Thursday with a league-most $49.3MM in cap space, with Hurns’ previous rookie deal set to take up barely $600K of it going into his third and final season of a contract he signed as a UDFA. Hurns’ new deal will not only vault from from a status that saw him as the Jaguars’ lowest-paid starter to one that will place him high in the receiver hierarchy in terms of AAV. Only 10 receivers earn more than $10MM annually, with the line of demarcation residing between Randall Cobb and Jordy Nelson.

So, a clear bar has been set for Robinson, assuming he can continue on course as Jacksonville’s No. 1 target, and potential 2017 free agent Emmanuel Sanders, himself a No. 2 wideout.

The Jaguars now have multiple pieces of their talented skill-position corps locked into long-term deals, with Julius Thomas set for Year 2 of the five-year pact he signed in 2015. Robinson and Blake Bortles will become eligible to negotiate extensions after their third campaigns conclude.