Despite having his free agency largely nullified by a severe knee injury, Nate Chandler found two NFC North suitors this week. After making a visit to Detroit on Wednesday, the UFA tackle decided to sign with the Bears, Ian Rapoport of NFL.com reports (on Twitter). 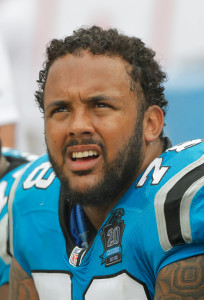 The Bears brought Jake Long in for a visit this morning but have opted to give that roster spot to Chandler, Rapoport notes. This proves as an interesting maneuver considering Chandler had not generated much free agency attention after the Panthers released him before the start of the new league year.

After trying out for the Buccaneers in April, Chandler visited the Lions about becoming a possibly depth piece but soon received interest from the Bears despite having no previous connection to the team.

A day after his 27th birthday, Chandler will make arrangements to venture to his second franchise. The Panthers slotted him into their starting lineup in 19 games, with the former UDFA from UCLA seeing time at both tackle and guard during the 2013 and ’14 seasons, but a knee injury sustained midway through the 2014 campaign sidetracked his career. Carolina placed Chandler on IR last September and watched as its line helped Cam Newton and Jonathan Stewart lead a cutting-edge ground attack during a 15-1 season that ended with an NFC championship.

With the Bears, Chandler will likely compete for a role behind projected starters Bobby Massie and Charles Leno. Chicago also added interior-line presences Manny Ramirez and Ted Larsen this offseason. Chandler could potentially add to this versatile group should he stay healthy.