The Bills will be without their second-round pick this year, but their first-round choice will take the field this season. Linebacker Shaq Lawson is expected back between Weeks 6 and 8, source tells ESPN.com’s Adam Schefter (Twitter link). That timeline means that Lawson is likely ticketed for the PUP list. 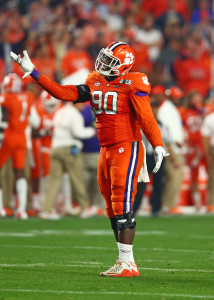 Initially, it was expected that Lawson would miss 4-5 games, but he’ll need some additional time to recover from shoulder surgery. Buffalo took Lawson with the No. 19 overall pick in this year’s draft while many other teams were said to have moved him down their boards due to his ailment. The Bills knew the risk in taking the Clemson product, but they still felt that his upside made it all worthwhile. Sometime in October, the Clemson product will set out to show that GM Doug Whaley made the right call in selecting him.

In his evaluation of the Bills’ rookie class for PFR, scouting consultant Dave-Te Thomas spoke highly of Lawson:

When healthy, Lawson has been a terror – whether in a relief role or during his lone year as a starter. Through his first two seasons, he recorded 79 tackles (47 solos), an impressive figure for relief duties. However, he delivered 23 of those tackles for losses and brought down eleven other opponents for no gains on running plays. He also registered twenty-one third-down stops from 2013- 14 and recorded five touchdown-saving tackles. Opposing runners were limited to minus 40 yards on 56 running plays directed at the defender. Only four of 32 passes targeted into his area were completed (12.5%), as nine of his twenty quarterback pressures came on third down snaps during his freshman and sophomore campaigns, with three of those hurries causing interceptions, two causing fumbles and another leading to a sack.

Replacing an All-American like Vic Beasley was a tall task for any young player and while Beasley is well remembered by Tigers fans, Lawson helped them move on quickly with his remarkable success attacking the pocket during his junior season. Throughout the 2015 regular season schedule, he was dominant.