SATURDAY, 2:42pm: Freeney’s Falcons base salary will be worth $1MM, Mike Jurecki of Fox Sports 910 reports (on Twitter). His base was $970K last season with the Cardinals.

TUESDAY, 9:00pm: Freeney will earn $2MM “up front” and can score another $2MM via sack incentives, tweets Ed Werder of ESPN.com. Admittedly, that report is a little unclear, as it’s highly unlikely that Freeney has secured $2MM guaranteed.

TUESDAY, 3:21pm: The Falcons have agreed to sign Dwight Freeney, according to Ian Rapoport of NFL.com (on Twitter). The veteran defensive end chose the Falcons over the Bengals, Rapoport adds. 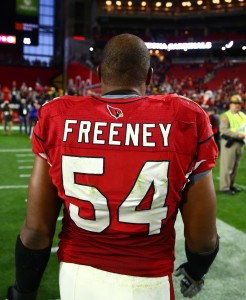 Freeney, 36, worked out for the Falcons earlier this summer but the team decided to put him on the back burner as they evaluated other players already in-house. After tallying eight sacks in an abbreviated 2015 season, Freeney makes a lot of sense for Quinn & Co. and the team recently made him an offer to jump into their defensive end group. The Falcons are slated to start Vic Beasley and Derrick Shelby at defensive end with support from Adrian Clayborn, Tyson Jackson, and now Freeney.

Recently, former NFL head coach and current analyst Mike Nolan pushed the Falcons to sign Freeney to amp up their quarterback pressure. Last season, the Falcons finished with a league-worst 19 sacks. Now, Freeney is coming to Atlanta with an eye on adding to his 119.5 career sack tally.

The Falcons were also considering a reunion with O’Brien Schofield, but they might not need him after adding Freeney. Recently, PFR’s Dallas Robinson ran down the top ten teams most likely to sign Freeney and put the Falcons at the top of the list.