2:30pm: The Cowboys are considering other free agent options, including Jimmy Clausen, according to Ian Rapoport of NFL.com (on Twitter).

For what it’s worth, the Bucs reportedly are not shopping Glennon, nor have they received calls on him as of late.

2:08pm: Cowboys executive Vice President Stephen Jones said the Cowboys have been in talks with the agent for free agent quarterback Nick Foles, as Todd Archer of ESPN.com tweets. However, the team is looking at multiple options to replace Moore. Jones said the Cowboys want to sign a backup QB “sooner rather than later,” but they want to get it right too.

1:47pm: The Cowboys are one of a handful of teams in on Foles, sources tell Mike Garafolo of NFL Network (on Twitter). He could sign somewhere as early as today, Garafolo adds.

9:15am: The Cowboys are back in the market for a veteran quarterback. Following Kellen Moore‘s ankle fracture, the Cowboys are considering Nick Foles as an option and discussing trades for other QBs, according to Ed Werder of ESPN.com. Josh McCown of the Browns and Buccaneers QB Mike Glennon could also be considered by Dallas. 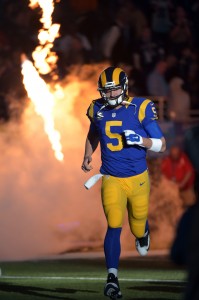 Recently, Cowboys owner Jerry Jones shot down the notion that the Cowboys would contact Foles, saying that the club would instead turn to its internal options. However, Moore’s injury has changed everything. With Tony Romo‘s primary backup sidelined, Dallas is left with only rookie Dak Prescott and 2015 UDFA addition Jameill Showers. If the Cowboys still intend on the recovering Romo taking every third practice session off, they’ll need to add a capable QB quickly.

McCown‘s status with the Browns has been in some dispute with some reports indicating that the club would only trade McCown if they received a tremendous offer. Meanwhile, other roster projections have had McCown left off of the 53-man roster. After waiving Connor Shaw earlier this summer, the Browns now field Robert Griffin III, McCown, Austin Davis, and third-round rookie Cody Kessler on their depth chart, as Roster Resource shows. McCown was thought to be a trade candidate earlier this offseason, with the Broncos among the teams that reportedly expressed interest. If Cleveland ends up releasing McCown, the team would save nearly $3.4MM on its salary cap.

Glennon, the backup to Jameis Winston, has not played since 2014 and was speculated as a trade target for quarterback-needy teams this spring. The 2013 third-round pick is entering his contract year and may view the Cowboys as a team that would give him a better chance to play given Romo’s health issues. The Bucs reportedly turned down a second-round pick for Glennon in March.

4 comments on “Cowboys Interested In Nick Foles, Other QBs”