The Lions will release Geoff Schwartz today, as Dave Birkett of the Detroit Free Press tweets. Schwartz is healthy but the team’s logjam on the offensive line left him on the outside. By releasing Schwartz today, the Lions are giving the veteran a little bit of a head start on finding his next job. 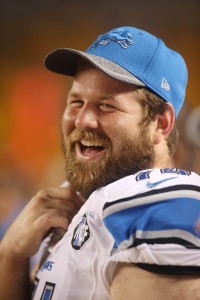 Schwartz, 29, signed a four-year contract with the Giants in March 2014, but injuries limited him to just 13 games over two seasons for New York. This offseason, he inked a one-year deal with Detroit. His Lions deal marked his fifth team in nine NFL seasons, though he never got to suit up for them in a regular season game. Schwartz has also had stops in Carolina, Minnesota, and Kansas City since entering the league as a seventh-round pick in 2008.

After trading for guard Brandon Thomas on Sunday, there was no room left for Schwartz. The Lions are now decidedly younger on the O-Line than they were one year ago.