The Bills claimed wide receiver Justin Hunter off waivers from the Dolphins, as Field Yates of ESPN.com tweets. The team has since confirmed the move while announcing that fellow wide receiver Sammy Watkins has been placed on IR. 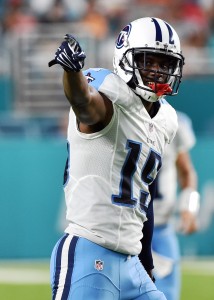 Hunter came into the league with a ton of hype behind him as a second-round pick in the 2013 draft. Unfortunately, Hunter was never able to put it all together at the NFL level. This year, the new regime in Tennessee bounced Hunter (and other notable players from GM Ruston Webster‘s watch), leading him to be picked up by the Dolphins. However, on Wednesday, Miami opted to waive the wide receiver.