2:25pm: Milliner was waived with an injury designation, so if he clears waivers, he’ll revert to the Jets’ IR list, tweets Daryl Slater of NJ.com. Of course, New York could then release him with an injury settlement.

1:51pm: With the Jets looking to trim their roster to 53 players, the front office has dropped a high draft pick from the old regime. After unsuccessfully trying to trade former first-rounder Dee Milliner, the Jets have opted to simply waive him, as Rich Cimini of ESPN.com tweets. 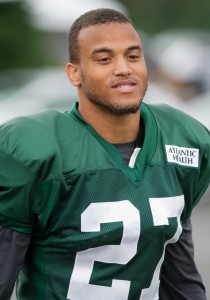 The cornerback’s future in New York was already cloudy, as the Jets had declined to pick up his 2017 option. Furthermore, the team already had a crowded depth chart at cornerback, as Milliner was sitting behind Darrelle Revis and Buster Skrine. In three seasons with the team, Milliner has appeared in 21 games. The 24-year-old has compiled 63 tackles and three interceptions (all during his rookie campaign) throughout his career.

Photo courtesy of USA Today Sports Images. Albert Breer of MMQB.com (via Twitter) first reported that the Jets were working to trade Milliner.