Could Greg Hardy go from the gridiron to the octagon? The controversial defensive end says that he’s changing sports and shifting his focus to mixed martial arts. 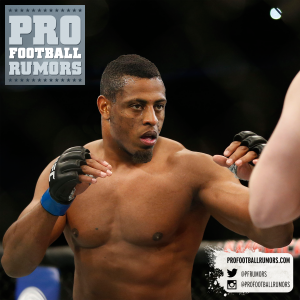 “I’m very focused and excited to start my MMA career,” Hardy said in a statement provided to Ariel Helwani of MMAFighting.com. “I’m going to do this the right way, I can assure you of that.”

Hardy, once a top defensive player in the NFL, was suspended for the bulk of the 2014 season and part of the 2015 season for a domestic violence incident. The Cowboys gave Hardy a second chance, but he was reportedly a thorn in the side of coaches. This offseason, teams were unwilling to take on all of the headaches that would come with signing Hardy and it now sounds like he is moving on from football altogether.

Hardy does not have a real MMA background to speak of, but his reps claim that several promotions have already expressed interest in signing him. Hardy’s team says that he currently weighs around 285 pounds and plans to fight as a heavyweight when he debuts, most likely in 2017. Under the unified rules of MMA, heavyweights weigh-in between 206 and 265 pounds.

It’s not immediately clear whether the UFC would consider signing Hardy, but the company has shown a willingness to sign non-traditional celebrity fighters in the past. In 2010, the UFC signed boxer James Toney for a one-off fight against ex-champ Randy Couture. Last month, former WWE superstar C.M. Punk made his octagon debut when he fought Mickey Gall in a welterweight bout. The UFC may not want to put on another “freak show” fight so close to Punk’s unsuccessful debut, but another major promotion such as Bellator would likely have serious interest in the former defensive end.