The Rams have announced the hiring of Matt LaFleur as their offensive coordinator. LaFleur previously served as the Falcons’ quarterbacks coach. 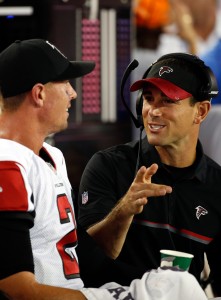 LaFleur is widely credited with helping to develop Matt Ryan. Long considered a solid starter, Ryan put it all together this past season en route to an MVP award. Pro Football Focus’ metrics also ranked Ryan as the No. 2 QB in the game, putting him behind only Tom Brady, whose Patriots knocked off Ryan’s Falcons in Super Bowl LI.

LaFleur worked with new Rams head coach Sean McVay while the two were with the Redskins. McVay picked his defensive coordinator a long time ago, but it seems that he waited specifically so that he could hire LaFleur. After molding Ryan into a beast, LaFleur’s next task will be to get the most out of 2016 No. 1 overall pick Jared Goff. While Goff showed flashes in his rookie season, the youngster is still largely green. The right tutelage will go a long way toward helping his progress, but the Rams will also have to improve their offensive line in order to maximize his time in the pocket.

The 37-year-old LaFleur has worked as an offensive assistant at both the collegiate and professional levels, with his most recent college job coming as the Notre Dame quarterbacks coach in 2014. He served in the same capacity with the Redskins from 2010-2013.