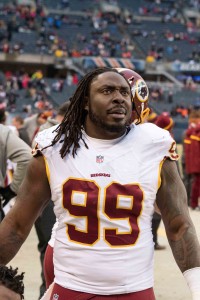 Jean-Francois was released by the Redskins earlier this month, giving him the opportunity to go elsewhere. He also had visits with the Seahawks and Bears, but he ultimately landed in Green Bay. Now, he’ll help offset the Packers’ loss of Datone Jones after he left for the Vikings. He’ll also come in handy for the first month of the season while Letroy Guion serves his suspension.

Jean-Francois ranks as PFR’s No. 5 free agent interior defender still on the board. Since being released by Washington, Jean-Francois has visited the Seahawks and Bears.

Jean-Francois, 30, played in 32 games (eight starts) with Washington over the past two seasons. Last year, he saw action on roughly 40% of the club’s defensive snaps, racking up 32 tackles and 1.5 sacks in that span. Heading into Thursday, we had RJ-F ranked as the No. 5 free agent interior defender still on the board.