Trades, apparently, are all the rage in the NFL now. Early Friday morning, the Rams and Dolphins agreed on a trade that will send defensive end William Hayes and a seventh-round pick (No. 223 overall) to Miami. In exchange, the Dolphins will send back their sixth-round selection (No. 206). 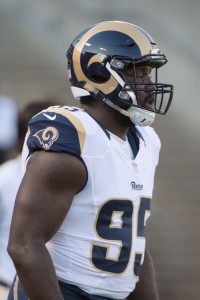 “Will has been an integral member of our defense since he became a Ram in 2012,” said Rams GM Les Snead in a statement. “His passion set the tone for our defense and served as an example for his teammates. Off the field, he showed compassion as he was a major contributor to the St. Louis and Los Angeles communities, working to improve the plight of the homeless. We wish Will and his family the best of luck in all of his future endeavors.”

The move clears a bit of room for the Rams but it’s likely that this was driven by football reasons. Hayes’ three year, $17.5MM contract signed last year is looking extremely reasonable as lesser pass rushers get showered with money this offseason. Ultimately, the team probably felt that Hayes wasn’t a good fit as they transition from a 4-3 to a 3-4 defense under new coordinator Wade Phillips.

Hayes’ deal called for him collect on a $2MM roster bonus on Saturday while $1MM of his $3.5MM base salary also becomes guaranteed, Tom Pelissero of USA Today tweets. The Dolphins are happy to pay out that salary as they add a tremendous defensive end to back up starters Cameron Wake and Andre Branch. The Dolphins run a 4-3 scheme and Hayes should thrive under new DC Matt Burke.

Hayes, 32 this spring, appeared in 14 games (all starts) for the Rams last season and racked up five sacks and 43 total tackles. Since joining the Rams in 2012, he has never had less than four sacks per season and has averaged five sacks per campaign. Pro Football Focus has always been fond of his work in St. Louis/Los Angeles and last year he received a 83.4 overall score. That placed him as the No. 17 edge defender in the NFL (thanks largely to his favorable run defense grade) and put him ahead of big names like Nick Perry (who just signed a monster deal with the Packers), Bruce Irvin, Ryan Kerrigan, and Tamba Hali.