Mitch Trubisky is likely to become the first quarterback off the board in the draft later this month, but ordering the rest of the class is exceedingly difficult, according to Jason La Canfora of CBSSports.com. Scouts consider the second-tier of signal-callers to be comprised of Deshaun Watson and Patrick Mahomes, but it’s unclear which prospect will be selected first among that pair. Davis Webb, meanwhile, is picking up more steam as a potential first-round pick, while “attitude and maturity” questions could force DeShone Kizer out of the first round. 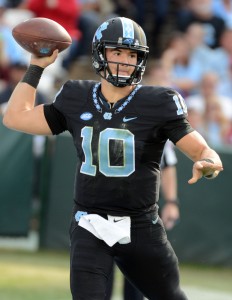 The Chargers are putting in “ample work” on this year’s quarterback class, and are perhaps more likely to select a passer at No. 7 than many observers believe, per La Canfora. Both head coach Anthony Lynn and owner Dean Spanos have intimated their openness to drafting a quarterback in 2017, and Los Angeles is reportedly “serious” about finding a long-term successor to Philip Rivers. So far, the Chargers have been linked to Kizer, Webb, and Tennessee’s Joshua Dobbs.

Like Los Angeles, the Saints and Cardinals may also try to secure replacements for Drew Brees and Carson Palmer, respectively. New Orleans will select a quarterback on Day 1 “in all likelihood,” writes La Canfora, and could use either pick No. 11 or No. 32 to draft a passer. For what it’s worth, I sent Kizer to the Saints at the end of the first round in PFR’s first 2017 mock draft.

Arizona, meanwhile, is attempting to “gauge internally” the price of trading up from No. 13 in order to draft a quarterback, reports La Canfora. Cardinals brass met with Trubisky on Monday, as team owner Michael Bidwill, general manager Steve Keim, and head coach Bruce Arians dined with the UNC signal-caller in Phoenix, tweets Mike Jurecki of FOX Sports 910. Arians voiced concerns about Trubisky last month: “The growth potential is obviously there,” said Arians. “The question is why wasn’t all that talent starting for the last three years? That’s always bugging me.”

Finally, the Texans “are drafting a quarterback high,” declares La Canfora, and Mahomes is unlikely to fall past Houston at No. 25. Clearly, the Texans are in need of talent under center, as the only quarterbacks currently on the roster are Tom Savage and Brandon Weeden. Veteran passers such as Jay Cutler and Colin Kaepernick aren’t expected to interest the Texans, so a draft pick will probably be added to the squad.