There’s mutual interest between the Giants and free agent running back LeGarrette Blount, according to Ian Rapoport of NFL.com (on Twitter). He adds that there could be a potential match between the two sides before the draft. 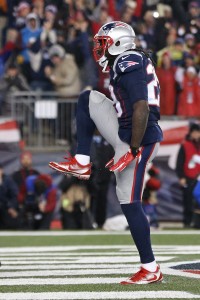 Blount, at one point, had an offer on the table from the Patriots, but there’s no room for him now that Mike Gillislee is on board. The Giants, meanwhile, are looking to bolster a depth chart currently headlined by rising sophomore Paul Perkins. There are some good running backs near the top of this week’s draft, but the Giants have bigger fish to fry and would probably prefer to first address holes at offensive tackle, linebacker, and other spots.

At this stage of the offseason, the Giants might be able to sign the 30-year-old for cheap, giving them one of the league’s most productive power backs. Last year, Blount signed an incentive-laden deal with the Pats that featured a meager base salary of $760K. It’s not crazy to think that he would settle for something similar this time around.

If signed, Blount would likely split carries with Perkins while Shane Vereen serves as the team’s primary pass-catching option out of the backfield.