Ohio State cornerback Gareon Conley has been accused of rape by a woman who met him in a Cleveland hotel, according to TMZ. Conley, meanwhile, adamantly denies the allegations. 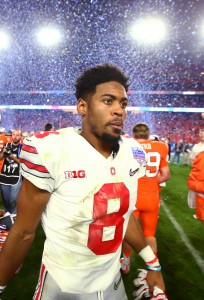 The woman alleges that Conley invited her to partake in a foursome. She declined and instead offered to watch the other three people have sex. Conley, she alleges, forced her to go from spectator to participant and had sex with her against her will. The woman went to the hospital for a rape kit, but refused to speak with police afterward.

Two of Conley’s friends were interviewed by police and they said that Conley never had intercourse with the woman. According to them, the woman was looking for revenge after being asked to leave the hotel room. Meanwhile, Conley’s attorney told Cleveland19 that the accusations against him are “ludicrous and ridiculous.”