Steelers wide receiver Martavis Bryant has been conditionally reinstated by the NFL, according to a press release from the Steelers. Bryant may join the Steelers at the training facility and participate in meetings, conditioning work and similar activities. “Once arrangements have been confirmed regarding Bryant’s clinical resources in Pittsburgh,” he will be permitted to participate in preseason practices and games, paving the way for him to suit up in Week 1 of the regular season. 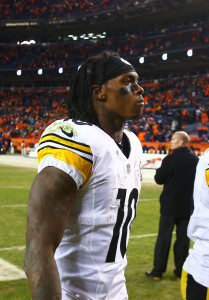 “We appreciate that he has taken the necessary steps in an effort to get his personal life in order. We also understand this is just the beginning as he works to return to the team and meet all of the conditions of his reinstatement,” GM Kevin Colbert said in the press release.

The conditions of Bryant’s reinstatement are not yet known, but drug tests will surely be a part of his regimen. At some point during the season, he’ll receive full reinstatement if everything checks out.

Bryant had been suspended since March 2016 for multiple failed drug tests. The 25-year-old has looked great when on the field, but he has appeared in only 21 regular season games since entering the league in 2014. If he can stay on track, Bryant has the ability to become the team’s top option at wide receiver after Antonio Brown.