Lions, Giants In On LeGarrette Blount

The Lions and Giants are in play for LeGarrette Blount, league sources tell Charles Robinson of Yahoo Sports. The Giants’ interest has been known for a few weeks now, but the Lions connection is new. 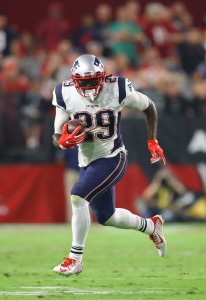 The Lions did not select a running back in the draft but they might look to bring in some extra competition at the position. Ideally, the Lions would like to use Ameer Abdullah as their main ball carrier with Theo Riddick as the pass-catching specialist, but Abdullah’s health cannot be counted upon. Zach Zenner, who impressed at times last season, and Dwayne Washington round out the running back depth chart. If signed, Blount could potentially squeeze Washington out of Detroit.

Blount remains on the market after turning down a modest one-year offer from the Patriots. At this stage of the game, he may have to settle for a similar deal if he wants to find an NFL home.

6 comments on “Lions, Giants In On LeGarrette Blount”