Brigham Young linebacker Harvey Langi might have been the most wanted undrafted free agent of 2017. Langi received a $100K base salary guarantee and a $15K bonus to sign with the Patriots, according to Tom Pelissero of USA Today (on Twitter). 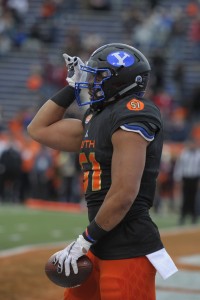 Heading into the draft, Langi was viewed as a potential middle-round selection, but he did not hear his name called on Day 3. He’ll now try and make the Patriots’ 53-man roster as an inside linebacker, though he also has previous experience at defensive end. Despite not getting drafted, it’s safe to say that Langi had interest from several teams after things wrapped on Saturday. His $115K package is by far the most lucrative deal given to any UDFA, dwarfing the $62K collected by Colorado linebacker Jimmie Gilbert when he signed with the 49ers.

The Patriots also shelled out $31K to sign UCF defensive back D.J. Killings. Typically, UDFAs receive something closer to $5K to sign.