The Zach Orr free agent tour continues. Today, the linebacker is meeting with the Colts, (Twitter link via Alex Marvez of SiriusXM). 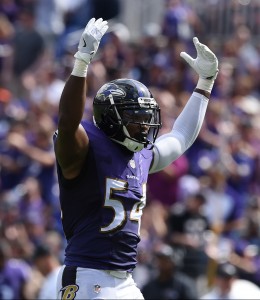 The Colts visit is sandwiched between his Lions visit on Thursday and his upcoming powwow with the Jets on Saturday. Orr tells Marvez that he expects to hear back from the Lions later today and his agent (Twitter links via Josina Anderson of ESPN.com) indicated that everything went well in Detroit. It’s not uncommon for scheduled visits to get canceled when a player reaches a deal with another team, but since Orr has interest from roughly half of the teams in the NFL, it stands to reason that he will get together with at least a handful of them before making a decision.

The Colts have already made major renovations to their linebacker group this offseason. Adding Orr would give GM Chris Ballard‘s team an embarrassment of riches, but no team has ever complained about having too much talent in the front seven.

The Colts project to start three free agent additions – John Simon, Sean Spence, and Jabaal Sheard – as linebackers in the 3-4 scheme, along with the returning Edwin Jackson. The reserve group also new faces in rookies Tarell Basham and Anthony Walker Jr. plus free agents Barkevious Mingo and Jonathan Bostic. An Orr signing would be the Colts’ sixth major free agent linebacker pickup of the offseason.