Matt Jones is not a key part of the Redskins’ plans for 2017, so he is (understandably) looking to pursue opportunities elsewhere. Jones’ agent asked the team to release his client, as Stephen Whyno of the Associated Press writes. 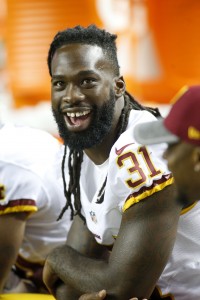 Reading between the lines, Engelhard’s decision to go on record with the media on this matter might not be a good sign for his effort to get Jones on the open market. Odds are, Engelhard has been pushing Allen behind the scenes for several weeks to cut the running back but has so far been unsuccessful. Eventually, however, something has to give. The Redskins tried to find a suitable trade for Jones in the spring but did not find much of a market.

Jones was once the Redskins’ starting back but he has been bypassed by Robert Kelley. This year, Oklahoma product Samaje Perine figures to see a good percentage of the carries and Chris Thompson will return as the team’s pass-catching specialist out of the backfield. That leaves little-to-zero room for the talented but fumble-prone Jones.

2 comments on “Matt Jones’ Agent Asks Redskins To Cut Him”