Bills To Work Out Anquan Boldin

The Bills are set to audition wide receiver Anquan Boldin, according to ESPN.com’s Dan Graziano (on Twitter). The workout will take place on Monday with other players also involved. 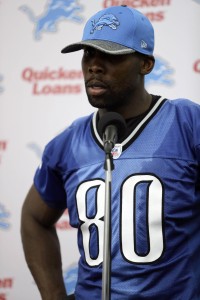 Boldin, 36, led the Lions with 22 red zone targets last season. He had 67 catches and a career-high eight touchdowns, though he averaged a career-worst 8.7 yards per grab (584 yards in total). The veteran is not a deep threat, but he could provide insurance in the event that Sammy Watkins is once again held back by injury.

As it stands, Watkins, rookie Zay Jones, and veteran Andre Holmes are the team’s top receivers. Although Buffalo improved in other areas, it’s possible that the Bills have left themselves a bit thin at WR. Adding Boldin could help to fix that.

It’s worth noting that Boldin has some history with Bills quarterback Tyrod Taylor. Taylor was the Ravens’ backup quarterback while Boldin was in Baltimore.