With Kenneth Dixon set for meniscus surgery, the Ravens are getting some reinforcements at just the right time. Baltimore will sign running back Bobby Rainey, according to Jeff Zrebiec of The Baltimore Sun (Twitter link). 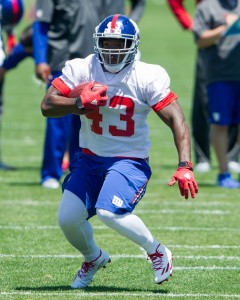 Rainey, 29, spent the 2016 campaign with the Giants but he only got to carry the ball 17 times while adding 20 receptions. On special teams, he averaged 6.5 yards per punt return and 25.5 yards per kick return. A five-year NFL veteran, Rainey’s most notable pro seasons came with the Buccaneers in 2013 and 2014, as he rushed for more than 400 yards in each year. Rainey didn’t get a lot of opportunities with the G-Men last year, but he has shown that he can be a decent runner with pass catching ability.

Rainey will now slot in behind Terrance West, Danny Woodhead, Buck Allen, and Lorenzo Taliaferro on the Ravens’ running back depth chart. There could be a chance for him to stick in Baltimore now that Dixon has been ruled out for the season.

The signing actually marks Rainey’s second go ’round with the Ravens. Rainey’ broke into the NFL as an undrafted free agent with Baltimore in 2012 and even spent time on the 53-man roster, but he was never on the active gameday roster. His time with the Ravens ended when he was cut prior to the 2013 campaign.