The Vikings and defensive end Everson Griffen are finalizing a massive four-year extension, Ian Rapoport of NFL.com tweets. Griffen confirmed the deal in a Wednesday morning scrum with beat reporters. Griffen’s previous deal had him signed through 2018. The new pact should keep him in Minnesota for the remainder of his career. 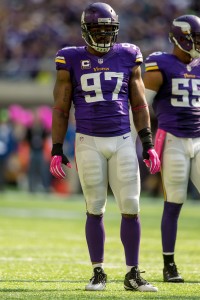 The extension is worth a whopping $58MM with $34MM in guarantees, a source tells Ian Rapoport of NFL.com (on Twitter). The “new money average” on the deal comes out to $14.5MM. We should have a better handle on the value of the deal when information comes out about the cash flow and the amount of money guaranteed at signing.

Griffen, 29, is coming off of his second consecutive Pro Bowl appearance after posting 48 tackles, 8.0 sacks, and three fumble recoveries. Since becoming a full-time starter for the Vikings in 2014, he has notched 30.5 sacks in total. The former fourth-round pick has gone from a rotational piece to an indispensable part of the team’s defensive line and he’ll now have a contract to reflect his importance to the team.

Pro Football Focus has graded Griffen as a top-30 defensive end in each of the last three seasons. He has also been remarkably durable, missing only one game in the past six seasons.