The Browns have released quarterback Brock Osweiler, Zac Jackson of The Athletic reports. Cutting Osweiler was the likely route for Cleveland after he failed to beat out second-round rookie DeShone Kizer for the team’s starting job, though the club will still have to pay the veteran his fully guaranteed $16MM salary. 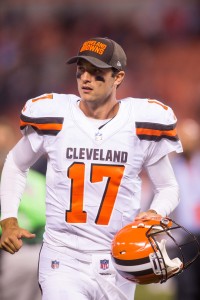 The Browns acquired Osweiler in March in an unprecedented trade with the Texans, when Houston essentially paid Cleveland a 2018 second-round pick just to take on his contract. The expectation then was that the Browns would either flip Osweiler elsewhere or cut him, and they went the latter route after they couldn’t find a taker via trade.

Now, if Osweiler signs elsewhere, he’ll likely do so for the league minimum $775K, which will give the Browns a relatively small bit of financial relief. But with the recent releases and trades of Joe Haden, Desmond Bryant and Cameron Erving, the Browns basically made back the money they’re obligated to pay Osweiler.

While Osweiler had a miserable 2016 in Houston after signing a big-money deal in free agency, he seems likely to find work as an inexpensive backup somewhere. Not only is Osweiler still fairly young (26), but the ex-Bronco brings size (6-foot-7, 240 pounds), a big arm and a second-round pedigree (2012) to the table.