The Patriots made a notable addition to the taxi squad on Thursday. Former Giants and Jets tight end Will Tye has been added to the team’s 10-man group, as Mike Reiss of ESPN.com notes (on Twitter). 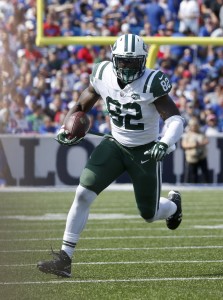 Tye met with the Patriots on Wednesday and it didn’t take long for a deal to come together. It was expected that Tye would land a 53-man roster spot somewhere in the NFL, so this is a bit of a boon for the Pats. Terms of his deal are not yet known, but it would make sense for him to be earning more than your average p-squad player.

Tye, 25, was a serviceable tight end for the Giants in 2015 and 2016. He appeared to be in line for a decent-sized role when he landed with the Jets earlier this month, but things did not work out that way. Instead, Austin Seferian-Jenkins heated up while Tye slipped on the depth chart.

The tight end met with the Chiefs and Ravens after getting cut by the Jets, but he did not sign with either club. Now, the Pats have Tye on the practice field and the timing is probably not coincidental. The Patriots face the Jets on Sunday at MetLife Stadium.