The Giants plan to interview Jim Schwartz for their head coaching vacancy within the next week, according to ESPN’S Adam Schefter. Schefter’s sources indicate that Schwartz will be a favorite — if not the favorite — for the position. 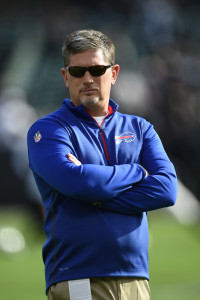 Schwartz, who is currently in his second season as the Eagles’ defensive coordinator, previously served as the Lions’ head coach from 2009-13. His tenure in Detroit was largely disappointing, as he compiled a 29-51 regular season mark in the Motor City and took his team to the playoffs just once in five years, losing his only postseason game.

Ian Rapoport of NFL.com, in addition to providing a list of candidates the Giants planned to interview for their GM position had they not hired Gettleman, also confirms that New York will be focusing on veteran head coaching candidates (Twitter link).

Should Schwartz leave Philadelphia, Eliot Shorr-Parks of NJ.com tweets that Eagles DB coach Cory Undlin would be a logical in-house candidate to replace him.