Former Lions receiver Calvin Johnson shocked the NFL when he retired following the 2015 season at the age of 30. The three-time First Team All-Pro selection announced last week that he has no intention of returning to the field, the Sporting News’ and SiriusXM’s Alex Marvez writes. 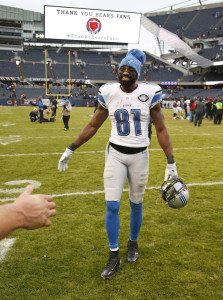 During the 2017 season, there were reports of teams pursuing Johnson but he is happy to spend time with his family.

Don’t expect to see him coaching on the sidelines anytime soon either. The six-time Pro Bowl wideout said: “Coaching just takes up too much time,” Johnson said. “I got to the building pretty early when I was playing and coaches were already there and they leave after the players. As far as spending time with family, that’s what I was looking forward to.”

If he does make a return to the game in either capacity, don’t expect it to be with the Lions. The relationship between the team and Johnson is still fractured after the team demanded $1MM be returned from a 2012 signing bonus. Johnson ultimately gave the money back but the gesture severed ties between the two parties. Though Detroit has reportedly made attempts to salvage the relationship, Johnson has denied any contact has been made.

Since retiring in 2015, Johnson has served as a consultant around the league and has worked with receivers in Oakland and Miami. In nine NFL seasons, Johnson recorded 731 receptions for 11,619 yards and led the league in receiving yards in back-to-back seasons in 2011-12.

2 comments on “Calvin Johnson Not Interested In Return To NFL”