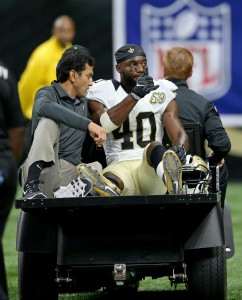 Breaux has had an up-and-down tenure with the Saints. He was stellar in 2015, grading out as a high-end starter per Pro Football Focus’ metrics. However, he did not deliver an encore in 2016 and his 2017 season was lost to injury.

In October, the Saints designated Breaux to return from IR. He began practicing, kickstarting a three-week window for the team to place him on the 53-man roster. However, a setback required an extra 3-6 weeks of recovery and the Saints were unwilling to tie up a roster spot as he got the required rest. The Saints did not activate him within the window, meaning that his season was done.

Given his background, the CFL star turned NFL notable should have a ripe market for his services. However, since this is an unusually deep market for cornerbacks, he may have to wait until some of the bigger names find their homes.

Meanwhile, the Saints are planning to use the lowest tender on restricted free agent wide receiver Willie Snead. Given his performance in 2015 and 2016, it seems likely that another team will scoop him up.

2 comments on “Saints Will Not Tender CB Delvin Breaux”