Rob Gronkowski To Play In 2018

Five-time Pro Bowler Rob Gronkowski announced Tuesday (on Instagram) that he’ll be returning to the Patriots for the 2018 season after sitting down with Patriots coach Bill Belichick. 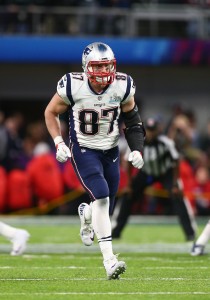 “I met with coach today and informed him I will be back for the 2018 season with the Pats,” Gronkowski said in a caption for his post. “I have been working out, staying in shape and feel great. Looking forward to another championship run.

There had been rumors nearly the entire offseason that the four-time All-Pro tight end might call it a career after eight seasons and two Super Bowl titles. The 28-year-old’s decision to not take part in the team’s voluntary workouts this offseason certainly didn’t quell those rumors.

There had been reports that Belichick lashed out at Gronkowski in front of teammates because of his participation at Tom Brady‘s Sports Therapy Center and with Brady’s trainer, Alex Guerrero. Ben Volin of the Boston Globe reported earlier this month that Gronkowski was looking for a raise on his current deal and that the retirement rumors and his decision to not attend the workouts could’ve been him angling for a new contract. Gronkowski is under contract through the 2019 season.

Injuries have also limited Gronkowski of late, as he’s been held to just 22 games over the last two seasons. He hasn’t played a full 16 regular-season games since his sophomore campaign in 2011.