Boston to Arizona? On Wednesday afternoon, the Cardinals will meet with free agent safety Tre Boston, according to Mike Garafolo of NFL.com (on Twitter). Josina Anderson of ESPN.com (Twitter link) first reported that Boston was en route to Arizona. 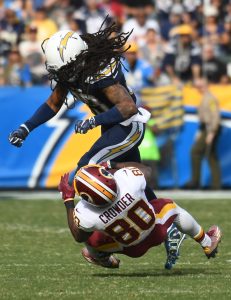 The Cardinals intend to use safety Budda Baker at nickelback in certain packages, helping to fill the void left by Tyrann Mathieu‘s departure. In those instances, Boston could help hold down the fort at safety.

The Raiders, Browns, and Giants expressed interest in Boston back in March, but we haven’t heard much on that front in recent weeks. The Colts met with Boston about two weeks ago, but he left Indianapolis without a deal.

The market has been painfully slow for free agent safeties this year. In addition to Boston, longtime starters Kenny Vaccaro and Eric Reid are also unemployed as of this writing.

Last year, Boston had to settle for a one-year deal with the Chargers. He was hoping to land a multi-year deal this year, but at this point it looks like he’ll have to settle for yet another platform contract.

In 2017, Boston started in 15 of his 16 games for the Chargers and totaled 79 tackles with eight passes defensed. Heading into the start of free agency in March, we had Boston ranked as the third-best safety available.