The Vikings have reached agreement on a deal with top pick Mike Hughes, a source tells NFL.com’s Tom Pelissero (on Twitter). Hughes will now look to build on a productive spring and compete for nickel and punt return duties when he reports to the team on Tuesday. 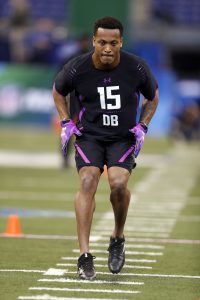 Hughes, the No. 30 overall pick in this year’s draft, was one of several late first rounders to be held up in talks this year. The contract of Seahawks rookie running back Rashaad Penny was to blame as the No 27 overall pick took less in fourth year guarantees than last year’s No. 27 selection, Bills cornerback Tre’Davious White. After that happened, the Vikings and other clubs near the back of the order had a bit of extra leverage. After some delay, the two sides reached a compromise on Thursday.

Hughes will fight for playing time behind incumbent corners Xavier Rhodes and Trae Waynes this year. He also figures to see time as a kick returner given his special teams success at UCF.

With Hughes’ deal in the books, there are only 12 unsigned draft picks left in the NFL. For a complete look at the status of all 256 draft picks, check out PFR’s tracker.