The Browns have agreed to trade running back Carlos Hyde to the Jaguars in exchange for a 2019 fifth-round draft pick, Adam Schefter of ESPN.com tweets. It’s a blockbuster deal that gives the Jaguars a proven tailback in the absence of starter Leonard Fournette. 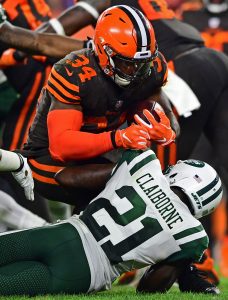 Just eight months ago, Hyde signed a three-year, $15MM free agent deal with the Browns to become their No. 1 running back. But, with a pair of talented options behind him on the depth chart, the Browns pounced on the opportunity to build on their draft capital while taking a significant salary off the books.

Through six games this year, Hyde hasn’t exactly set the world on fire. He’s averaged just 3.4 yards per carry this year – a career low – though he does have five rushing touchdowns on his stat line.

Prior to joining the Browns, Hyde spent the first four years of his career with the 49ers and served as the starting running back for the final three. All in all, he averaged a solid 4.2 yards per carry in SF and a strong 4.6 yards per attempt in 2016. Hyde also offers capable hands, as evidenced by his 59 catches for 350 yards last season.

In conjunction with T.J. Yeldon, Hyde should provide the Jaguars with a competent rushing game for however long Fournette is sidelined. However, Hyde can hardly be expected to be a panacea for what ails Jacksonville. Blake Bortles‘ inconsistency is clearly costing the Jags as they’re 1-3 in their last four games. In those contests, Bortles has thrown just four touchdown passes against six picks. He’s also been sacked 13 times, so the Jags’ offensive line will have to do better in order to keep defenses honest and open holes for their new running back.

With Hyde out of the picture, the Browns should be able to increase rookie Nick Chubb‘s workload. Browns fans have good reason to be excited about the Georgia product after he amassed 105 yards and two touchdowns off of just two carries in Week 4 against the Raiders. Pass-catching wizard Duke Johnson also figures to get more touches in the team’s revamped backfield.