Former Bills wide receiver Kelvin Benjamin went unclaimed on waivers, according to Adam Schefter of ESPN.com (on Twitter). He’s now a full-fledged free agent, but Schefter doesn’t expect him to last on the open market for long. 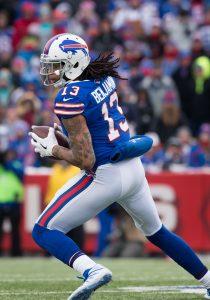 Benjamin’s Tuesday release came as a surprise, but it’s not a shock that the league’s 31 other teams declined to pick up his contract off waivers. Any team claiming Benjamin would have been responsible for the remaining prorated portion of his base salary, which comes out to a little under $2MM. Instead, a contender will likely swoop in and grab Benjamin for a lesser sum.

The Broncos could be a logical destination for Benjamin following Emmanuel Sanders‘ season-ending Achilles injury, but they could also stand pat after plucking Benjamin’s ex-teammate Andre Holmes off waivers. The Chiefs could also explore Benjamin after dumping Kareem Hunt, one of their best offensive weapons.

Benjamin, 27, has just 23 catches for 354 yards and one touchdown in 12 games for Buffalo this season, numbers that are a far cry from his best seasons with the Panthers. Still, a change of scenery may help Benjamin, and teams are curious about what he can bring to the table.