The Chiefs have agreed to sign free agent wide receiver Kelvin Benjamin, according to Adam Schefter of ESPN.com (Twitter links). Benjamin’s deal will run through the end of the 2018 season. 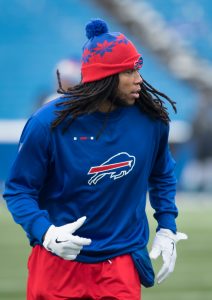 Kansas City had been on the lookout for wide receiver depth as Sammy Watkins continues to battle a foot injury. Watkins played only a handful of snaps in the Chiefs’ Week 11 loss to the Rams, and — even following a bye in Week 12 — was still unable to play in Week 13. He’s put in limited practice sessions so far this week, but Kansas City needed reinforcements behind Tyreek Hill, where the Chiefs are light on options outside out of Chris Conley.

Benjamin, 27, went unclaimed on waivers after the Bills cut him earlier this week, but that was hardly surprising given his contract. As a former first-round pick, Benjamin was locked into a guaranteed base salary that didn’t necessarily reflect his current market value. Any team that claimed him would have been responsible for the remainder of that salary, which would have come out to roughly $2MM. Now, the Chiefs are likely signing Benjamin at the league minimum rate, while the Bills — provided typical NFL contract language was used — will receive a small cap credit in 2019 thanks to offset language.

Even factoring in his draft pedigree, Benjamin doesn’t offer much in the way of upside and has historically had problems with his conditioning. Additionally, nearly every wide receiver metric has Benjamin near the bottom of the list. Among wideouts with at least 50 targets this season, Benjamin ranks dead last in catch rate (his 37.1% rate is more than eight percent greater than the next-worse pass-catcher). He’s 61st among 66 qualifiers in Football Outsiders’ DYAR, which measures value over a replacement level player, and 64th in DVOA, which measures value on a per-play basis.