Titans tight end Jonnu Smith is going to miss the rest of the season with an MCL injury, a source tells ESPN.com’s Adam Schefter (on Twitter). Smith, 23, went down while blocking for Derrick Henry on his historic 99-yard touchdown run and the injury proved to be serious. He’ll be placed on injured reserve this week in order to open up a spot on the roster. 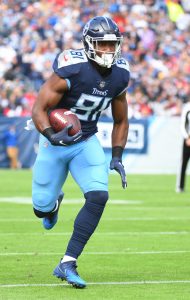 Smith has largely been utilized as a blocker in Tennessee, though he has flashed his hands on occasion. In a November loss to the Colts, Smith had six grabs for 44 yards. He also scored three touchdowns during the month of November. His season ends with 20 catches for 258 yards and three TDs,

The Titans kept their playoff hopes alive with Thursday’s win, thanks in large part to an all-time great performance from Henry. They currently have a 27% chance of reaching the postseason, according to Five Thirty Eight, with a pair of winnable matchups on deck against the Giants and Redskins.

One comment on “Titans TE Jonnu Smith Done For Year”