The NFL’s investigation into the three incidents that have put former Chiefs star Kareem Hunt‘s playing career in jeopardy is still ongoing, per Ian Rapoport of NFL.com. However, Rapoport writes that the league is expected to conclude its investigation before free agency opens in March, which means that any clubs interested in signing Hunt will have all the information they need prior to addressing their running back situation. 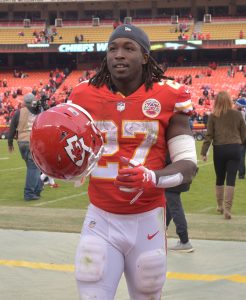 For now, Hunt remains on the Commissioner’s Exempt List, but once the investigation is over, the league will announce a suspension for Hunt, which is expected to be at least six games. But Rapoport suggests that, since Hunt was placed on the list with five weeks left in the 2018 regular season, he could see the length of his ban reduced.

Many have believed that the supremely talented 23-year-old would be playing in 2019, and the information that Rapoport passes along this morning certainly supports that notion. While he may be sidelined to start the 2019 campaign, it appears that he could be eligible to return to game action no later than October.

Although the Bears are the only team that we know has contacted Hunt since he was placed on the Commissioner’s Exempt List, Rapoport notes that several clubs have touched base with him and have been keeping tabs on him. Adam Schefter of ESPN.com agrees, saying that multiple teams are interested in Hunt and that he is expected to sign with a new team sooner rather than later.

For his part, Hunt has not spoken publicly since an interview he gave to ESPN shortly after his release, and Rapoport says he has been quietly attempting to turn his life and career around.

Hunt has undergone counseling for anger and alcohol issues.