The rumors surrounding the Eagles-Nick Foles situation appear accurate. The Eagles informed the Super Bowl LII MVP they are going to pick up his $20MM option, Tim McManus of ESPN.com tweets.

Rather than hitting free agency, Foles remains under Eagles control. However, this is likely the start of an extensive process. 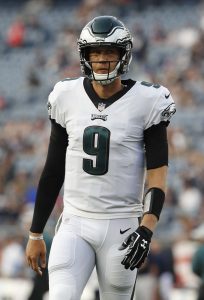 Foles is expected to pay $2MM to free himself from this option and become a free agent, but the Eagles in turn are then rumored to be planning a rare tag-and-trade strategy. Philadelphia’s target is somewhat modest: a third-round pick. But that draft choice would likely come in the 2019 third round, rather than the 2020 draft in a compensatory scenario. Foles, 30, is expected to sign the franchise tender immediately. It would be worth approximately $23MM.

This is a complicated scenario for a player who almost certainly will not be part of the 2019 Eagles, but the franchise is likely going to take the chance another team will part with draft compensation to acquire Foles.

The Jaguars make sense, possessing a veteran-fueled defense held down by Blake Bortles. Former Eagles quarterbacks coach John DeFilippo is now the Jaguars’ OC. The Jags will have to perform considerable cap gymnastics to make this work, though. A new Foles contract will be expected to be authorized by whichever team trades for him.

To some degree, the Redskins fit the profile of a Foles buyer — although, they might be aiming lower in a veteran pursuit — and Pat Shurmur coached Foles in Philadelphia. Neither of these teams will be sought as a trade partner, however, with the Eagles not eager to trade another quarterback within the NFC East like they did when they shipped Donovan McNabb to Washington in 2010.

The Dolphins are also moving on from their longtime quarterback, but they are not likely to be big spenders in free agency and are eyeing a rebuild centered around a 2020 first-round passer. Denver is in need of a long-term answer, too, after receiving below-average 2018 work from Case Keenum. But the Broncos targeting a first-round quarterback adds up better than replacing Keenum with Foles. Despite Derek Carr‘s presence, the Raiders might be a long-shot possibility, Eliot Shorr-Parks of 94 WIP writes, adding Mike Mayock is a “big believer” in Foles.

They of the NFL’s worst cap situation ($13MM over the projected salary ceiling), the Eagles will need to know they have a bidder willing to part with appropriate compensation before tagging Foles. The early consensus is the Jaguars will be that team.

19 comments on “Eagles Will Pick Up Nick Foles’ Option”