The Giants are trading Olivier Vernon to the Browns, according to Ian Rapoport and Mike Garafolo of NFL.com (on Twitter). In return, the Giants will receive guard Kevin Zeitler (Twitter link). The Giants had originally agreed to send the No. 132 pick to Cleveland, with the Browns shipping No. 155 back to New York, but the two side have since canceled that portion of the swap. 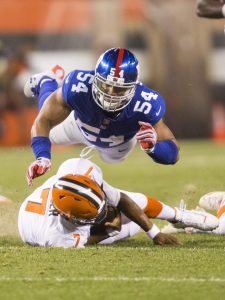 The deal gives the Browns a formidable defensive end combo between Vernon and Myles Garrett. The swap also allows the Browns to focus on other areas of need next week, rather than overpaying for valued edge rushers.

Vernon inked a massive five-year, $85MM deal with the Giants in 2016. A few years later, the Giants found themselves looking to unload him or potentially release him outright. Vernon is still productive, but he no longer profiles as one of the best edge rushers in the NFL. Even at his time of signing, his contract was a function of an inflated pass rushing market that continues to be player friendly.

Vernon is due $15.5MM in each of the two remaining years on his deal. The Browns had roughly $77MM in cap space entering Friday, but it’s not immediately clear whether the Giants will be chipping in towards what Vernon is owed. Such an arrangement is not unheard of. In the Case Keenum trade between the Broncos and Redskins, for example, the Broncos agreed to pay half of Keenum’s 2019 salary.

Vernon, 28, gave the Giants a career-high 8.5 sacks in his first season with the club. He’s continued to get to the QB with 22 sacks over the course of three years, but injuries have cost him nine games over the last two campaigns. Last year, he averaged four pressures per contest in eleven games.

The Giants, meanwhile, pick up one of the league’s best interior lineman in the trade. Zeitler was Pro Football Focus’ No. 6 ranked guard last season and is midway through a five-year, $60MM deal. The 29-year-old is set to make $10MM this season, though much of that hit will be absorbed by the Browns.

57 comments on “Giants To Trade Olivier Vernon To Browns”