The Packers won’t stop adding to their defense. Green Bay has agreed to terms with outside linebacker Preston Smith, a source told Rob Demovsky of ESPN.com (Twitter link). 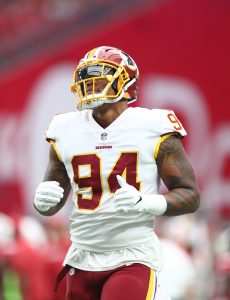 Ian Rapoport of NFL Network tweeted that it’s a four-year deal for Smith worth $52MM. He’ll get $16MM to sign with $27.5MM coming his way over the first two years of the deal, Rapoport reports. It’s been a big day for the Packers, particularly on defense, as they’ve already added safety Adrian Amos and fellow outside linebacker Za’Darius Smith. The three big signings in one day are indicative in the change of philosophy the Packers’ front office has undergone.

Under old GM Ted Thompson, the Packers were generally conservative and not very active in free agency. With team president Mark Murphy and new GM Brian Gutekunst now in charge, the team has been much more aggressive. With new coach Matt LaFleur in tow, the Packers have clearly decided to go bold.

They’ve already re-invented their defense, and will now have a very solid group of pass-rushers in both Smiths, Kenny Clark, and Mike Daniels. Smith comes to Green Bay from the Redskins, where he spent the first four years of his career. Last year he had 53 tackles, four sacks and one interception. The year before that he had eight sacks and two interceptions.

Defensive coordinator Mike Pettine, who LaFleur retained from Mike McCarthy’s staff, will have a lot of new pieces to work with. Paired with the returning pieces of Daniels, Clark, and the promising young cornerback duo of Jaire Alexander and Josh Jackson, the Packers’ defense has the potential to be really good next year.