The Broncos are set to sign quarterback Brett Rypien, according to Nicki Jhabvala of The Athletic (on Twitter). The Boise State product went undrafted last week, but there was a ripe market for his services. 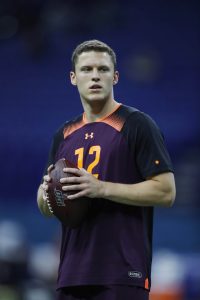 The Broncos are giving Rypien a “six-figure guarantee,” according to Jhabvala, which would give him one of the most lucrative signing bonuses of any UDFA.

With the signing, the Broncos’ quarterback room just got a bit more crowded. Already, Joe Flacco may be feeling some heat from second-round pick Drew Lock, and the club also has journeymen Kevin Hogan and Garrett Grayson on the depth chart.

Rypien completed 67.3% of his passes for 3,705 yards in his final collegiate season. He also threw for 30 touchdowns against just seven interceptions.

Rypien has been lauded for his intangibles, but many NFL evaluators wonder if he has the arm to compete at the NFL level. His 9-inch hand measurement at the combine also didn’t do him any favors.