Former Broncos and Raiders punter Marquette King will visit the Texans on Tuesday, a source tells Adam Schefter of ESPN.com (on Twitter). King’s market has been relatively quiet in recent weeks, but he could find a home once the compensatory pick formula is taken out of the equation. 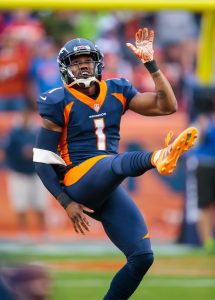 King, one of the most outspoken punters in NFL history, was released by the Raiders in April 2018, with reports indicating that head coach Jon Gruden wasn’t a fan of King’s personality. The 30-year-old received interest from the Vikings and Giants, but he landed with the Broncos on a three-year deal.

Last month, the Dolphins expressed some interest in signing King. The Bills, according to one report, also showed interest in King, though a separate report put that in question.

King’s 20 punts traveled an average of 44.1 yards last season, which ranked 22nd in the NFL. However, he managed to place seven punts inside the 20-yard line, placing him just outside of the top 10.